Pete Newell, one of the most influential coaches in the history of basketball, who won a national championship at the University of California in 1959, an Olympic championship in 1960, and whose camp became a required seminar in low-post play for generations of professional stars, died Monday in Rancho Santa Fe, Calif., near San Diego. He was 93.

Skip to next paragraph 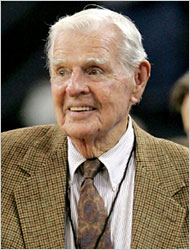 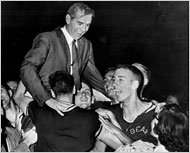 Earl Schultz, a friend and caretaker who had been one of Newell’s former players at Cal, confirmed the death to The Associated Press, saying Newell had had smoking-related lung problems.

Like Hank Iba and Clair Bee, two other legends of college coaching at a time when the college game was far more popular than the professional game, Newell was a thoroughgoing master of basketball rudiments, a stickler if not a scientist regarding the fundamentals, a preacher of discipline on offense and tenacity on defense.

He was an innovator as well; according to Bill Fitch, a former coach of four N.B.A. teams, Newell was the first to use the “over-the-top” pass as an alternative to the bounce pass, and he found uses for the crosscourt pass, something conventional wisdom eschewed because of its risk of being intercepted. His stall strategy, called “three out, two in,” to protect a lead, predated the similar “four corners” technique popularized by Dean Smith at North Carolina.

Unlike Iba and Bee, however, Newell — who coached at Michigan State and the University of San Francisco as well as the University of California at Berkeley — wielded lasting influence with older players as well. His 1960 Olympic team was led by Jerry West and Oscar Robertson, who became two of the greatest guards in N.B.A. history.

Newell also held several executive positions in the N.B.A.; in 1975, as the general manager of the Los Angeles Lakers, he brought Kareem Abdul-Jabbar to the team in a trade with the Milwaukee Bucks.

“There is no way you can measure Pete’s impact on the game,” West, who starred for the Lakers, told The New York Times in the early 1990s.

Peter Francis Newell Jr. was born on Aug. 31, 1915, in Vancouver, British Columbia, the youngest of eight children, and he grew up in Los Angeles. His father was a quiet man, a carpenter and a devout Catholic, but his mother, Alice, led a lively social life and had dreams of her children becoming movie stars. Young Pete appeared in small roles in several movies — he claimed Eric von Stroheim once called him a dumkopf for ruining a scene — and said Jackie Coogan was chosen ahead of him for the title role in the Charlie Chaplin film “The Kid.” But he was happier on his own, off screen, fending for himself.

“By the time he was 10 years old, Pete Newell was a crack poker player, a dedicated coffee drinker and a retired Hollywood actor,” wrote Bruce Jenkins, the author of a 1999 biography of Newell, “A Good Man.”

Newell went to Loyola University in Los Angeles (now called Loyola Marymount), and after serving in the Navy during World War II, he became the head basketball coach at the University of San Francisco (where he also coached baseball, golf and tennis). In 1949, his team won the National Invitation Tournament, at a time when it was the premier college basketball event. He coached at Michigan State from 1950 to 1954 and at Cal from 1954 through 1960. After winning the N.C.A.A. national championship in 1959, Cal returned to the finals the next year, losing to an Ohio State team that featured John Havlicek, Jerry Lucas and Bob Knight. His overall record for 14 seasons was 234-123, a winning percentage of .655.

Newell’s wife, Florence, died in 1984. He is survived by four sons.

Always an intense man who relied on coffee and cigarettes, Newell retired from coaching after his Olympic victory in 1960, when doctors warned that further stress would kill him.

From 1960 to 1968, he was the athletic director at Cal. In 1976, he began his “big man” camp with a single player, Kermit Washington. Last August, the 32nd session was held in Los Angeles. Besides Jabbar, its alumni have included Shaquille O’Neal, Bill Walton, Hakeem Olajuwon, James Worthy, Bernard King and dozens of other pros.